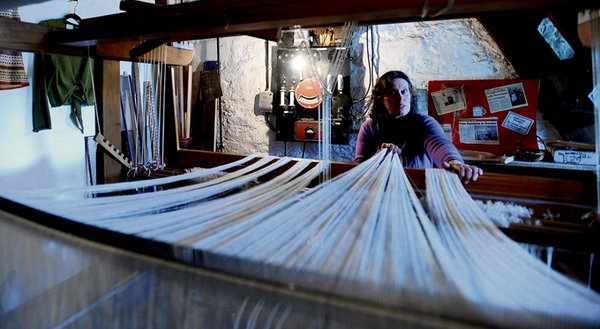 The courageous and successful strikes by textile workers in the shirt factories of Manhattan and Massachusetts during 1908 and 1909 were the first ever strikes organised by women and for women’s demands such as equal pay. They are seen as the start of women becoming active for their rights in all corners of the globe.

In 1910 the second “World Conference of Socialist Women” was held in Copenhagen/Denmark. It passed a motion by German activists Clara Zetkin and Käthe Dunker to mark and celebrate the struggle of the American mill-workers with a world-wide women’s day on March 8th – International Women’s Day was born.

The song “Bread and Roses”, now famous and sung all over the world in many languages origins from Lawrence / Massachusetts were it was first written down in 1912 – the beautiful tradition of presenting women at work with a flower certainly origins from that.

In Dungiven textile – workers have been keeping the tradition alive for several years now and they are going to do this year.

Linen weaver Marion Baur and members of her team will be out on March 8th to visit women at work and present them with a red carnation. The owner of County Derry’s only active linen-weaving mill is delighted to actually be on the streets herself. “During the past year there has been far too little activity and far too much fear about sickness, we decided to set an example and be out to show working women the appreciation they deserve “says Marion who has been involved in activities around March 8th for many years.

“There is absolutely no reason to ease the struggle for women’s rights in 2021. In many corners of the world and indeed here in Europe women bear the brunt of economic crisis, suffer from cuts, especially the barbaric lack of money for health-care, which has been making the struggle against the Corona Virus extremely difficult. Women are underpaid and find it hard to make the ends meet. Not only are the roses scarce, the bread is hard come-by for many as well”.

Marion and her colleagues will be visiting a number of places where women work in Dungiven and surrounding area They are proud to be part of a huge and growing number of activities all over the world around the 8th of March. There is no county known now where International Women’s Day is not marked in one form or the other.

Marion Baur: “It was our sisters in the American mills who started this – I think as textile-workers today we should feel obliged to carry on the good tradition and at the same time be aware that International Women’s Day is as far from being just a ‘historic event’ as ever. Pointing the finger at women’s problems and their struggles is as important as it was over a hundred years ago and celebrating their successes is making us happy. There would be no right for women to vote, nothing like equal opportunities to find work, had it not been for the struggle of women of the generations before us. Much has been achieved but much more has to be gained”