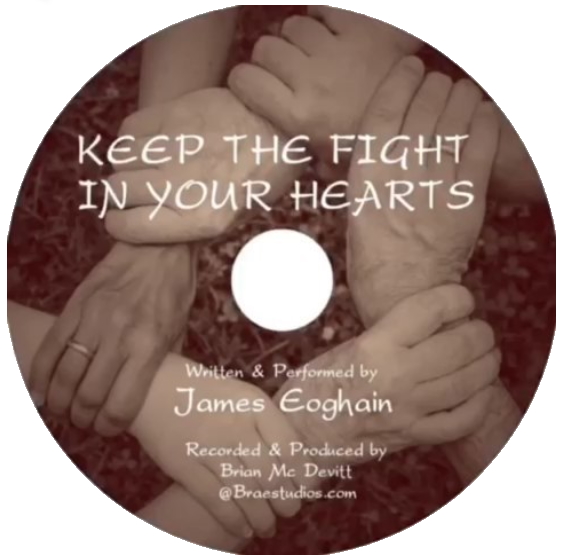 When I was asked to write a few words about Joe Mc Gonigle’s new song “Keep the fight in your hearts” my first thought was “…no need to do so – it’s very self-explanatory”.

I felt honoured though and think that the “bigger picture” the just released piece fits into (or doesn’t fit into) requires a closer look and those who “add it to their playlist” (or not) need to be asked what their criteria for censorship (I have no better word) are.

And I think, Joe and his amazing song-writing should be placed amongst the numerous artists in all countries who look for the truth, who ask for justice, equality and – in his own words – “the treating of ordinary people with the respect they deserve”. We’ll attempt that at the end of this reflexion.

“Keep the fight in your hearts” is typical for his unique style of song-writing, he is able to put more meaningful words into a title than many others use nowadays to make up a whole song.

His lyrics make sense, they can be understood by ordinary people – like those whose houses are crumbling in Donegal or like those who “have no home to go to” in his songs about the shame of homelessness in the 21st century.

The very big and extremely positive response “Keep the fight in your hearts” is getting – recognition by the main-stream-media or not – proves this understanding and it shows the burning hunger for truth and justice many people, especially young ones, feel.

I would guarantee that the appeal to politicians in the song “… Take off your crowns and stand with the people…” will cause spontaneous applause in any concert.

Just by the way: If it is this (rather modest, I would call it) appeal that makes the “powers to be” not have the song on their play – and other –lists and agendas – what can we learn from that?

Nothing has changed, tolerance, will for real change, even basic humanity and ruling politicians have been and are contradictions in terms.

Joe is not alone, historically and in the now:

Rambling Jack Elliot, Woodie Guthry, and Pete Seeger were disliked by the authorities (to put it mildly) in their home country USA. Billy Braggs and Dick Gaughan share their fate in the UK and Scotland, Hannes Wader’s songs weren’t played on German Radio for many years, Victor Jara was murdered in his home – land Chile because of his stubborn singing against the military regime.

These are but a few examples of artists who sung, spoke, and sometimes shouted the truth. They have one thing in common: The ordinary people like them, the authorities don’t. What does this say about the authorities?

These people, Joe included, are extremely important, especially today when too many have gone silent (or given in to being silenced).

The event is “invitation only” – if you want to be there, contact us now, also for a full programme: