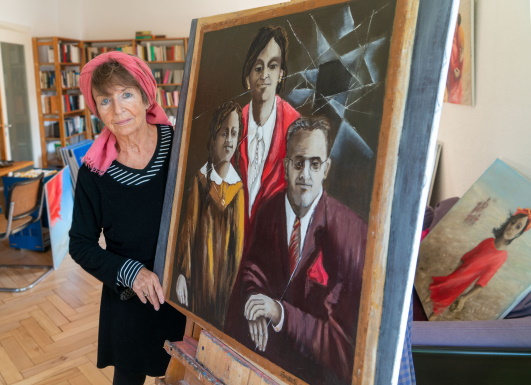 News just came that one of the most profiled German artists, Ursula “Ula” Richter will exhibit some of her paintings in County Derry as part of the 27th Flax Mill Open Day this coming September.

The Dortmund – based painter just completed an extremely successful exhibition in Berlin which marked her 80th birthday. It was hosted by “Friends of Nature” (Naturfreunde) in their gallery and attracted visitors from many countries. Amongst them was Marion Baur, owner of and chief – weaver at Derrylane Flax Mill. The organiser of the annual Open Day and Yard Fest at County Derry’s only active linen weaving mill who has been following Ula Richter’s work for a long time, was fascinated:

“At 80 she is as productive and ingenious as ever – the story behind every painting is unique and her outspokenness against racism, war and injustice comes across on the canvas. We are absolutely delighted that this huge artist will exhibit at the Flax Mill.”

Ursula Richter was born in Göttingen, studied painting and Graphic Design in Hannover and in Berlin. Since the 1960s, she has been active in peace- and anti-fascist initiatives. She has been living and working in Dortmund since 1975. For her first ever exhibition in Ireland, Marion Baur has chosen 12 paintings which will be shown in the listed mill-cottage. The exhibition will be opened on Friday, September 11th 2020 at 6pm – one day before the 27th Flax Mill Open Day and Yard Fest.

Visitors from 12 countries have already booked their place for the exhibition – opening. Amongst them are Birmingham – based photographer Bernard S. Davis, German singer/accordionist Isabel Neuenfeldt and American dancer, Danielle Emblom, to mention but few. The guests – many of them artists from all corners of the globe – will be welcomed by the manager of Dungiven Library Sharon Riley.

Marion Baur is urging interested friends of the art who want to be at the opening to book now:
“We have limited space during the opening to 50 people – the cottage will make for a great atmosphere but at this early stage there are only 3 places left, so please book with us now.”

People who are interested in more detail or want to book their place at the exhibition – opening can contact Flax Mill by mail: flaxmill@gmx.net , by phone: 0044 2877742655 or using the Contact Form.

Last Minute News:
– It is now certain that one of Ula Richter’s most famous paintings “Familie Schnoog” will be part of the exhibition in September. The painting depicts a family who were murdered in Auschwitz concentration camp. It has been shown in many places at the 75th anniversary of the liberation of Auschwitz!
– We can also confirm that bronze – caster Charlie Mallon (Moneymore), owner of “Mallon’s Foundry” will bring some of his castings to be shown alongside Ula Richter’s paintings. Mallon’s work is known the world over, his statues are often based on Celtic legends.